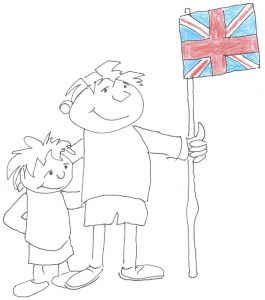 The story focuses on democracy and the rule of law, individual liberty and mutual respect, and tolerance for those with different faiths and beliefs as fundamental British values. The story explores these aspects of our collective identity dramatically to make them comprehensible and memorable for a young audience, using masks, mime, puppets and storytelling craft to engage attention and direct understanding.

A group of storytellers meets and argues about British stories. Each has a clear opinion about the subject and themes which might make a story British. One argues for a story with a historical setting about Kings and Dragons and the building of nations; another dismisses this in favour of a story of faith, diversity and the bonds of mutual tolerance, only for the third to argue for a story set amongst the people of the nation which describes collective endeavour as well as the ingenuity and creativity of the individual. The final storyteller suggests: that we show our character by listening to the stories each other has to tell, knowing that in turn we will have our chance to be heard and that we define ourselves through contact with people who are not the same as us, as much as those to whom we are alike.