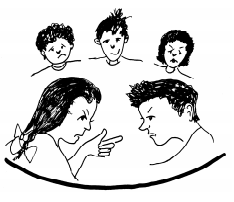 Suitability: Key Stage Two, Key Stage Three
‘Standing By’  explores the collusive  role  of the watcher in bullying activity and  encourages children  to  understand  that  ‘just  watching’  implicates  the bystander in the violence and intensifies its  impact on the target.  ‘Standing By’  aims  not  only  to  increase  understanding,  but  to  affect  children’s  life choices and change behaviour.
‘ … he knows what he’s doing…… sometimes he acts like he doesn’t know, but he does.’
Bullying  happens.  Most children, when made aware of the effects of bullying behaviour  on  their  targets  feel  ashamed and will  stop.  Some  children  know exactly what they are doing and how it affects other people but get something they want or need by doing it.

‘Standing By’  seeks to challenge all  levels  of bullying  behaviour,  exploring  its  destructive  impact  on  the  target,  and  on witnesses,  as  well  as  on  the  bullying  group,  its  leaders  and  on  the  wider community.  ‘Standing  By’  will  increase  understanding  that  bullying  takes many forms, not all of which involve physical aggression, and that deliberately causing the suffering of others in  any way is  never acceptable.  The project will stress  that no one is a victim and no one is a bully, rather that these are roles which we may be forced into or willingly  adopt, and which we can choose to  reject.  Coping  strategies  for  targets  of  bullying  activity,  and  for unwilling colluders, will be suggested in the story and in follow up materials.